Land the mischievous Joker in this Quickspins online slot for the chance to win big! Joker Strike is a 5x3 slot with excellent graphics and an additional wheel where you can land additional prizes. Playable on all devices, you can spin its reels from £0.10 to £100 per spin. With the innovative Hi Roller feature, you can increase your chances for a win and land even the highest payout of £10,000! 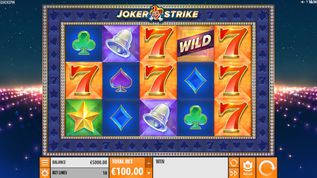 Joker Strike slot is a medium-high variance slot coming from the studios of Quickspin. It comes with a layout of five reels in three rows and ten fixed paylines. Playable on all devices, you can spin the reels from £0.10 to £100 per spin. You can benefit from a wild symbol, Hi Roller feature and a Joker Strike Feature which can get you the highest payout of £10,000.

Joker Strike slot has eight standard symbols. The four playing card suits – diamond, club, spade and heart – are the low-value symbols which award payouts for combinations of three, four and five matching symbols on the paylines.

The high-value symbols include standard slot symbols like bells, stars, sevens and jokers. They too award payouts for combinations of three, four and five identical symbols on the paylines.

The special symbol is a Wild symbol which substitutes for all symbols. The Wild symbols are only present in Hi Roller mode on the outer wheel.

How to Play Joker Strike Slot

Playing Joker Strike slot is as easy as it gets. Since the ten paylines are fixed, you need to set only the total bet before you press the orange spin button. When you press the TOTAL BET button, a menu opens holding the 15 available options. As we have mentioned above, you can play from £0.10 to £100 per spin. Once you set this, you can press the spin button and watch the reels spinning.

If you like to enjoy the gameplay without pressing the spin button after each round, press the button with two inverted circular arrows. Here, you can select the number of rounds to be played automatically and select some additional settings. You can stop the autoplay feature at any given time by pressing the STOP button.

Joker Strike is available online as a free play version. This version of the game gives you the opportunity to try the gameplay before you register an account with an online casino and make a deposit. It is almost identical to the real-money version and includes all its features except the banking of wins. Since you are playing with bonus funds, you cannot expect to withdraw your wins.

How To Win Joker Strike

Winning payouts in Joker Strike are awarded for landing combinations of three, four and five matching symbols on the paylines. When you open the paytable, the pays are for your current bet and they depend on whether you are playing a normal game or a high roller game. Nevertheless, they start with the diamond, the club, the ace and the spade, in ascending order. They are followed by the bell, the star and the red seven, while the joker is the highest-paying symbol in the slot.

The Joker Strike feature is triggered whenever you land a symbol line win. This feature will add symbols to the reels if the marker on the outer wheel stops on a symbol from the line win. Depending on the number of triggering symbols, you can get six to ten extra symbols on the reels for additional wins.

The Hi Roller mode adds extra features to those from the normal game. It comes with three different features, each consisting of five spins. Guaranteed Wild adds a Wild symbol to the reels on each spin which moves clockwise around the reels until they stop. The Wild Strike feature adds two Wilds to the outer wheel and if the marker stops on a Wild symbol, the feature will add Wilds to the reels. The Double Chance feature adds an extra marker to the outer wheel doubling the chances of hitting the Joker Strike feature.

The RTP of Joker Strike is 98.11% which is well above the average in online slots. This, combined with the variance of the slot, makes Joker Strike a very interesting game to play.

Although it doesn’t offer much bonus features, Joker Strike can be a very lucrative game. It looks good and plays even better with the possibility to get you high prizes!

If you want to try Joker Strike slot, claim your welcome offer from the casinos promoted here at Slotswise and spin the reels of Joker Strike for the chance to win big!