Stars Megaways features the fullest 117,649 ways to win and plays in the memorable style of cascading/collapsing wins. That means winning outcomes are deducted from the reel-set to make space for a new set of symbols and this new set can, in turn, create yet another win that results from the same spin. 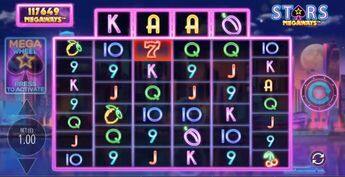 Play the Stars Megaways slots for a chance to win random free spins bonus and up to 10,000x on the winning bet.

Dominated by neon colors and the purple that fits such a layout ever so nicely, Blueprint Gaming have released their latest megaways adventure called Stars Megaways slot.

The usual arrangement on the reel-set hasn't been abandoned as it packs the six reels and rows that can shift between two and seven. On the top of the reels is a row of four reels that spins independently of the rest, but still contributes to the winning outcomes.

Besides wins in the base game the players can see the benefits of a bonus feature that can reward up to 30 free spins which come with win multiplier with each cascading win.

There is something about neon lights and the color purple that makes the two fit together like a hand and a glove.

The players will find a reel set that is populated by fruits and high cards symbols, all done in neon sign style. These are treated to some dancing lights when they become part of a winning outcome and big wins are accentuated accordingly.

Stars Megaways slots scores in other areas in terms of the design. As it has become the norm, the game offers a smooth play and an environment that is quite familiar, being that of Blueprint Gaming's simplicity and Big TIme Gaming's megaways approach.

How to Play Stars Megaways Slot

Your adventure through the neon streets of this futuristic city can begin with the push of the spin button, which can be found on the right side of the reel-set. Just underneath it is the autoplay button.

The bets can be set from the left-hand side by pressing the down or up pointing arrows until you have arrived at the desired bet that will be played for each subsequent spin.

Pressing on the big round button opens up a list of bets from where you can pick yours in just two clicks. The smallest bet is £0.10 per spin and the biggest bet is £10.00 as it has been customary for most megaways slots released in the course of 2019 and 2020.

Stars Megaways slot has an autoplay option that you can configure to make the game spin for the specified number of times. Optional are the conditional stops that help mind the balance. These are stop the autoplay mode after a single win amount, a total balance decrease amount, on bonus feature and so on.

How to Win Stars Megaways Slots

The game offers two symbol categories that are found throughout all megaways slots - picture symbols, which pay the higher amounts and the cards symbols that range between the nine and the ace, that pay amounts that are lower in value.

The picture symbols consist of the game's scatter/bonus, the wild and the cherry, lemon and plum symbols. The red hot seven is the most lucrative symbol on the paytable of Stars Megaways slot.

Win outcomes are made with three symbols, or more, that are of the same kind. These must occur starting on the leftmost reel and continue in succession. There can be two or more symbols on the same reel that connect with matching symbols on the adjacent reel for a win.

The bonus game is triggered when three spades stop on the reel-set in any position. Initially you get to choose one of the three in order to reveal a random number that points to the number of free spins that are granted for the bonus.

One you have selected the spade and the number has been revealed, you can either take those free spins or gamble them for a chance to win a lot more. The gamble can result in fewer spins, so the trade-off may result in a lucky outcome or an unlucky loss of your free spins.

Before the rounds begin you are notified that three additional spades on the spin bring five extra spins and four spades bring 10 extra free spins. What is more, each cascading win adds a multiplier on the following win outcome and these can add to some rather impressive sums.

Blueprint Gaming may release this as a free play demo slots. Additionally, the game should be available as a demo at the online casinos that offer slots in practice mode.

If you have played megaways slots before you aren’t going to find an awful lot of difference between those games in the category that offer the same base game and same payouts, and that is most. The symbol payouts are small because they are balanced by the cascading wins payout mechanism. On the other hand, the free spins bonus can be found rather thrilling because of the gamble feature and the element of surprise.