iSoftBet is continuing to expand its Twisted Tales series of slots, where the main characters are villains from popular tales. This time, the developer created an online slot based on the master villain and nemesis of Sherlock Holmes, Professor Moriarty. The Moriarty Megaways is a six-reel, cascading reels game that takes you to Victorian Baker Street. Thanks to the Megaways engine, the game can have up to 117,649 ways to win. Moreover, there is the Sherlock’s Max Megaways Feature, the Free Spins feature, as well as the Watson’s Mystery Symbols Feature. The game comes with a top prize of 10,000x your bet. Interested to learn more? Read our Moriarty Megaways Slot Review and discover the story of Professor Moriarty! 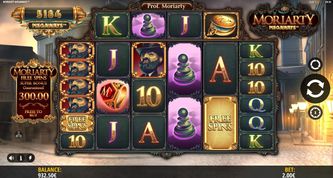 We’ve had many online slots based on Sherlock Holmes, so it’s great to see the detective’s enemy Professor Moriarty as the main character in a game. The Moriarty Megaways slot allows you to experience a new take on the classic detective story and spin the reels with the game’s villain. Here, players will benefit from cascading reels, free spins, unlimited multipliers, mystery symbols, and much more. At the same time, they will have the opportunity to win top prizes of up to 10,000x the stake. Read our Moriarty Megaways Slot Review and find out more.

iSoftBet is expanding its Twisted Tales slot series. For those who don’t know, Twisted Tales is a unique series of slots based on famous folktales where players get the chance to see the plot from the villain’s perspective. Some of the previous slots released as part of this collection are the Queen of Wonderland Megaways slot and the Morgana Megaways slot. This time, we’re meeting the enemy of the famous detective Sherlock Holmes - Professor Moriarty.

Travel back to the Victorian era and walk through London’s streets with Professor Moriarty in the new online slot called Moriarty Megaways. This six-reel slot features the popular Megaways engine that allows it to have a different number of symbols and up to 117,649 ways to win on every spin. For more details, read our Megaways Overview where we explain how this engine works.

To start your reel adventure in the Moriarty Megaways slot, you will have to place your bet at first, which ranges between £0.20 and £20 per spin. Just click on the chip to the right of the reels and adjust your bet. You can also take advantage of the Autoplay feature that allows you to set a number of auto spins that the game will play by itself. And in order to win, you need to land at least three matching symbols on an active payline, starting from the leftmost reel.

The maximum amount you can win from a single spin in the Moriarty Megaways slot is set at 10,000x of your bet, which is excellent. You can end up winning thousands of pounds from a single spin. What’s more, those who will join the hunt can look forward to wild substitutions, random modifiers, multipliers, mystery symbols, as well as free spins.

Naturally, when an online slot is based on a tale, the main character is the ‘good guy’ or the hero. But, with Moriarty Megaways, iSoftBet expands its Twister Tales slot series, where the main characters are the villains. So, this time in the main role we have Professor Moriarty from Sherlock Holmes tales created by British author Sir Arthur Conan Doyle. Overall, the design of the Moriarty Megaways slot is fantastic. The reel set is placed on the Victorian-era Baker Street. It’s one of the best-looking slots you’ll find online these days. Overall, the creative team at iSoftBet made a game with high-end graphics and top-notch soundtrack that adds a final touch to the dark and mysterious atmosphere.

On the reels, you’ll find low-paying symbols designed as card royals (9, 10, J, Q, K, and A). They award up to 1.75x your stake for six of a kind. Next are the high-paying symbols, designed as two chess pieces (pawn and king), as well as Moriarty’s signet ring and Moriarty himself. Of course, the Morirary symbol is the top-paying symbol on the reels, awarding up to 50x your stake for six of a kind. Furthermore, the mastermind’s golden pocket watch is the wild symbol that appears on the horizontal reel on top and substitutes for all regular symbols. The golden-frame icon with spider webs is the scatter symbol, used to trigger the Free Spins feature. Finally, there are two special symbols - Dr Watson and Sherlock Holmes, which appear during the Free Spins feature.

The Moriarty Megaways slot’s RTP is 96% which is the average percentage for online slots. Moreover, the game’s variance is high, which means that you won’t land very frequent winnings, but when you win, you’ll win a big prize. Plus, if get lucky, you can end up winning up to 10,000x your stake, which is impressive. Here you can read more about the Variance, Volatility and RTP in online slots.

The Moriarty Megaways slot is proof that slot developers with creative thinking can deliver a high-quality slot in terms of both design and gameplay. This is a Megaways slot that is packed with a number of interesting features. From cascading reels to free spins, there is a lot going on. Some of the features are the standard ones used in almost all Megaways slots, while others are unique to this game. So, let’s review all of the features in more detail.

Moriarty Megaways, like many other Megaways slots, uses the Cascading Reels feature. Every time you land a winning combination, the Cascading Reels feature is triggered. The symbols that are part of the win are removed from the reels and new symbols drop down to replace them. The cascades will continue as long as you land winning combinations. This can result in more winnings in one spin.

The Moriarty Megaways slot comes with random modifiers, among which is the Sherlock’s Max Megaways feature. This feature can be randomly triggered in the base game. When triggered, the reels will expand their maximum size, giving you 117,649 ways to win. What’s more, the feature also activates a progressive multiplier that increases by 1x with each consecutive cascading win.

To trigger the Free Spins feature, you need to land at least three bonus symbols anywhere on the reels, on the same spin. The more bonus symbols you’ve landed, the more free spins you’ll get:

In the Free Spins round, you are playing with the Moriarty set of reels and you will notice two smaller reel sets being added to the bottom of the main reels. One of them is marked with Dr Watson and another is with Sherlock Holmes. Your job is to unlock the Sherlock and Watson sets of reels as well. To unlock them, you need to collect three of Sherlock or Watson symbols.

If both trigger, they play one at a time. If you land a win, the Cascading Reels feature is triggered. Each win on any of the 3 sets of reels increases the multiplier without limits. What’s more, you can play with all 3 reel sets at once, which would lead to having 352,947 active Megaways. The bonus feature ends once you run out of spins or reach the maximum win of 10,000x your bet.

You’ll receive the same exceptional design and high-end graphics of the Moriarty Megaways slot when you play it from a mobile device. The game is built with HTML5 which ensures that you’ll receive high-quality gaming experience from all mobile devices. You can easily access the game on any Android, iOS and Windows device where it will perfectly adjust to your screen.

iSoftBet has come up with plenty of innovative online slots this year. We’ve already mentioned the other games that are part of the Twisted Tales series from this developer, so let’s share a couple of other iSoftBet slots. First is the Aztec Gold: Extra Gold Megaways slot, a game with the potential to deliver maximum winnings of 20,000x your stake. Next, we have the Book of Sheba slot, an Ancient Egyptian-themed reel adventure that puts the players inside Sheeba's palace. Another popular iSoftBet game is the Gold Digger slot which takes us down into the vault where a happy prospector is looking to hit the main vein, so there’s plenty of TNT involved.

As a conclusion of our Moriarty Megaways Slot Review, we could say that iSoftBet has made an excellent job. The game has a wonderful design, high-quality graphics, many bonus features, as well as top payouts that can reach 10,000x your stake. We believe that this game will become one of the most popular Megaways slots that are released on the market. So, if you’re a fan of such mysterious, Sherlock Holmes-themed games, make sure to try Moriarty Megaways and see the story from the villain’s perspective.

Discover the Moriarty Megaways slot by claiming a welcome offer right from this page and play at top-rated online casinos.