Discover the magic behind Machina on 46656 ways to win, courtesy of Kalamba Games. The reel adventure unfolds in a futuristic Hong Kong where android technology is ripe for the cloning of AI. The result is a high variance slot that offers three jackpots, of which the Platinum is 1000x. There is a Feature Buy option and a maximum exposure of 26,000x. 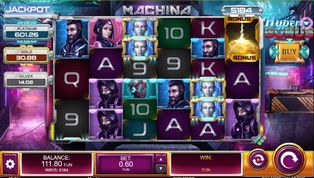 Discover how to make androids when playing the Machina Megaways slots. You could be playing for a chance one of three jackpot prizes.

This one is out for the sci-fi fans out there, coming straight from the slots kitchen of Kalamba Games. The Machina Megaways slot is an amazing look into a future where androids and humans are taking things to the next level through a dynamic and fun-loving gameplay.

Machina Megaways plays on six reels and rows that can shift between two and seven, which in turn influence the number of ways to win. The maximum number of megaways is 46656 and these expand thanks to the cascading wins mechanism which is possible with following any given win outcome.

Besides the base-game wins the game has a bonus feature and the option to buy one of the few levels at which the bonus plays. What is more, Machina has three jackpots which are in-game progressive and are relative to the bet that triggers that winning sequence. Needless to say, the game is stunning and offers enough to have any player interested.

In terms of the graphics design Kalamba Games have created something absolutely amazing. The idea behind the game is something which drives any creative mind in the sphere of sci-fi and dystopian futures, but things needn't look grim for the lucky players out there.

As the rows shift and the megaways expand, the seamless cascade of the winning outcomes creates a buzz around the reels that manifests as electric zap and crackle.

The sound score is equally amazing, filling the void with futuristic sounds, the droning of hovercrafts and of androids assembling on Machina Megaways slots. As for the layout, all of the controls are at the bottom of the screen. The feature buy option is in the top right and the jackpot meters are to the left of the reels.

How to Play Machina Megaways Slot

Start your adventure through the streets of a dystopian Hong Kong by pressing the purple, round Spin button in the bottom right corner.

To the left of it is the autoplay option. Pressing that button opens up a box where you can choose from the automatic spins presets, but also add optional loss limit and single win limit stops. When ready to engage Machina Megaways slot hands-free, press the autoplay button to start.

Choosing the bet is easy. Just a few clicks on the down and up pointing arrows scrolls through the amounts. The minimum bet in Machina Megaways is a small high £0.60 per spin, which reflects as 1000x on the win for the Platinum jackpot.

You can view the symbol payouts, game rules and bonus feature information by selecting the cog button in the bottom left corner. This isn't necessary because the game registers all wins and events automatically.

How to Win Machina Megaways Slots

Winning the game requires three or more matching symbols falling in sequence regardless of their position on the reels.

These outcomes must start on the leftmost reel. The game has wild symbols which can substitute for any, except the exploding orb which is the Bonus symbol.

The wild symbol can arrive in few variations on the reels. It can cover one grid position, two, three or four. In other words, the symbol comes expanded at various rates.

As it is usual for Megaways slots, the symbol payouts are small but this is offset by the cascading wins which can lead to multiple wins from just a single spin.

During the rounds the Bonus Accumulation Symbol is locked in the meter each time it appears on the reel-set. When you collect all, the game will transform the high-paying symbols into the android symbol and award extra spins.

The jackpot prizes are awarded with the android symbol. Ten of these triggers the silver jackpot, 12 or more trigger the gold, and 16 or more bring the 1000x on the bet Platinum jackpot prize.

Kalamba Games have released the game as a free play demo at online casinos that host demo and free play slots for registered players.

Both visually and numerically the game offers much to experience. Besides the 1000x jackpot the maximum exposure on the game is a whole 26,000x on the win. The bonus game has an extra in the symbol transform feature and a buy feature. So if anyone is up for a high variance slot, here is a game that will do you a solid gaming experience.

Discover the Machina Megaways slots by claiming a welcome offer right from this page and play at top notch online casinos.