This Red Tiger game was realised towards the end of April in 2018 and it gained prominence quickly after its release. In a few weeks’ time the game became one of the most popular slots and currently there are plenty of SlotsWise casinos that feature Laser Fruit slots. The standard number of paylines is 243, which is not that unusual but during one of the bonus features the number of active paylines can be increased over 60 million.

Laser Fruit slotis a game byRed Tiger Gaming, which is based on a retro theme, but has a rather modern design and outlook. The symbols that you’ll see on the reels are retro fruity symbols, but instead of being drawn in a traditional fashion, the creators of these game decided to make them as neon lights, hence the nameLaser Fruit slots. There have been a few such games over the years and it seems that players are quite fond of them.

This Red Tiger game was realised towards the end of April in 2018 and it gained prominence quickly after its release. In a few weeks’ time the game became one of the most popular slots and currently there are plenty ofSlotsWise casinosthat feature Laser Fruit slots. The standard number of paylines is 243, which is not that unusual but during one of the bonus features the number of active paylines can be increased over 60 million. Yes, you read that right, there are more than 60 million ways to win in Laser Fruit slot.

Laser Fruit, visually, is a perfect combination of retro and futuristic. The designers found inspiration in the slot games of the olden days, but they included a lot of modern and even sci-fi elements. The music and the sound effects in general are quite futuristic, just like the reel outline. When the spin begins the music intensifies and it culminates when the reels are about to stop spinning, especially if it is a successful spin, i.e. if you manage to hit a winning combination.

Additional visual effects appear, especially when a scatter symbols appears on the reels. As it is usually the case with games that have a futuristic feel about them, simple lines are used and there aren’t too many elements on the reels and the buttons are neatly arranged below and above the reels. 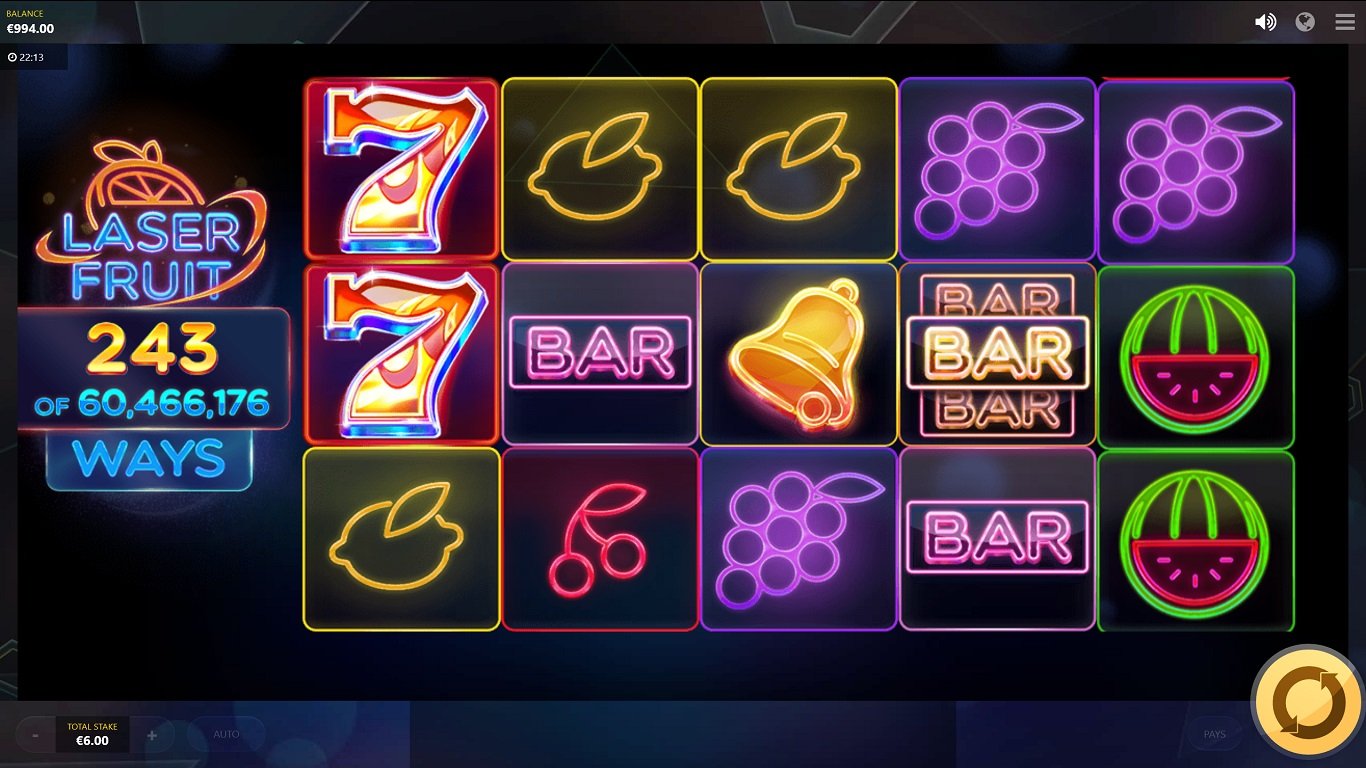 How To Play Laser Fruit Slots

The minimum amount that you can wager is just 20p, and the maximum stake is £100. You can select a range of values in between – 40p, 60p, £10, £80, etc. Just left of the total stake button you will notice the auto button, and this button activates the auto play. Here you can choose the total number of spins that you’d like to be automated, but you may also set a loss limit, which means that the auto mode will stop as soon as you lose the specified amount.

There are additional auto play options, you may, for example, set the reels to stop spinning after a particular win, or when the bonus feature is activated. In the top right corner you will notice a sound button and you can use it to toggle the sound off if you wish to play the game in silence.

How To Win Laser Fruit

In order to win in Laser Fruit slots, you will need to get a minimum of three instances of the same symbol on neighbouring reels starting with the leftmost reel. That is the only condition, the symbols don’t have to be aligned in a particular fashion, as long as the first one is on the leftmost reel.

As there are so many different ways to win, the number of symbols per combination isn’t limited to just five, but to ten. The cherry is the least valuable symbol, you will get 0.1 times your wager for three cherries, and if you manage to hit as many as ten, your wager will be multiplied by six.

The lemon, the orange, the grape and the watermelon aren’t too valuable either, although if you manage to get ten watermelons on the reels you will get a prize worth 14 times your wager. The bar, the triple bar, the bell and the 7 are a lot more lucrative, but if you have ever played a retro slot game you already know that. You will get the maximum main game prize if you manage to hit ten 7s on the reels, the award will amount to 25 times your wager. So, if you play with £10, the prize will be £250.

You may wonder how you can get ten symbols if there are only five reels. Well, neon lasers that fire randomly may add extra reels, up to a maximum of ten. With additional reels your chances of winning are increased, and there are a lot more winning combinations. In fact, if you manage to activate ten reels, the number of possible ways to win would reach 60,466,176 – a truly astonishing number of combinations. 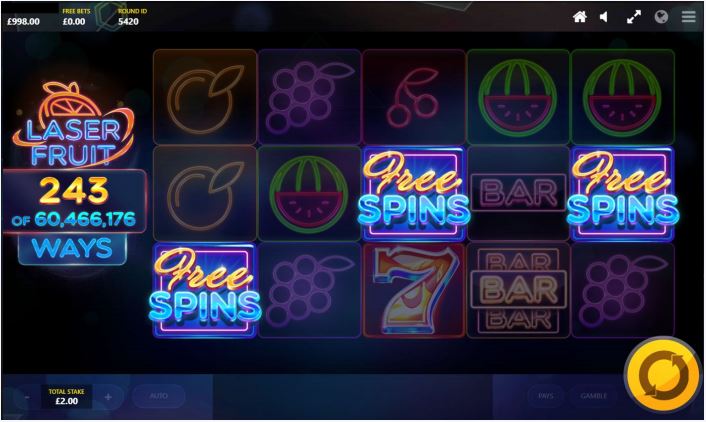 The fruit slots are some of the most played games in this industry, so it’s no wonder that software providers keep creating online slots based on this theme. The fruit theme dates back since the beginnings of slot machines in the traditional land-based casinos. Read our short reviews on some of the most popular fruit slots or click on each link to get all details on these online slot games.

Double Bubble was created by Gamesys and has the standard five reels and 20 paylines and it’s available on all devices: desktop, mobile and tablet. Double Bubble has a bright pink design and various fruit symbols that have the potential to bring you prizes if you land the right combo.

There are always huge expectations when a NetEnt game was about to be released and Berryburst slot was no different story. Considering that the title Berryburst slot contains the suffix ‘burst’, many expected that the new release would resemble the epically popular Starburst slot. Berryburst is a vivid and vibrant game with five reels and 15 paylines.

The RTP of Laser Fruit slot is just above 96%, or to be more precise 96.02% and the maximum multiplier, i.e. the maximum amount that you can win is 10,000 times your wager, and that is quite impressive. Red Tiger may not be one of the largest or most famous online slot developers, but they’ve done a pretty good job with Laser Fruit.

This game is already available at a number of SlotsWise casinos, so if you fancy games with a retro feel, register at one of our featured casinos, claim your bonus and then start playing Laser Fruit slots.