Jungle Jim and The Lost Sphinx slot is a sequel to a game that has left its mark on the world of online slots. The same reel-set is replicated here too, with 5 reels and 50 paylines in the free spins bonus. Up to five chain reactions on the tumbling reels can bring on multipliers of 10x in the base game and 20x in the 12 free spins, which is triggered by three scatters. 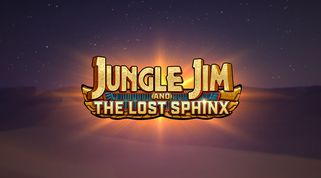 Discover the Lost Sphinx and join Jungle Jim on an adventure that can take you to potential winnings of up to 4000x on the winning bet.

A great game gets its sequel and will find itself on the slots rosters at good online casinos, and those that are on the Microgaming network.

The culprits behind the Jungle Jim and The Lost Sphinx slot are Microgaming, by way of Stormcraft Studios who are the main developers.

First appearances are not deceiving. Jungle Jim has been drawn up as a character whose purpose is to discover buried riches in exotic lands, but he's not quite that Rich Wilde from another slots series, in terms of the quality of the graphics, of course.

Still, Jungle Jim and The Lost Sphinx slot offers a lot to be anticipated for. The reel set consists of five reels and five rows that spin across a total of 50 paylines. This is the optimal arrangement, because you start off with five reels, four rows and 35 lines.

Much alike the first Jungle Jim slots, this one also features the tumbling reels style of play, where winning outcomes disappear and are replaced by a set of new symbols. The Ancient Egypt themed game gets a reel-set that is framed in a sandy decor topped by a bar that holds multipliers that can reach 20x.

Set on a sand dune, with a number of auspicious constellations in the background, Jungle Jim is bound for an adventure on the reels. The paytable doesn't include any high cards, so we get a rather colorful variety of on-theme objects, that is, artifacts.

The settings bar is a sleek handwatch-like display which contains the controls that you need to operate the reels and rows. With every symbol win the outcome is accentuated by a visual effect of light and glimmer.

The free spins bonus takes you to an underground chamber flank by statues of a famed deity - a nice touch to round off a decently made slot game by Stormcraft Studios.

How to Play Jungle Jim and The Lost Sphinx Slot

Jungle Jim's adventure begins with the push of the spin button, which is the square-like bit on the wristwatch. Underneath it is a coin stack symbol which opens up the selection of available bets.

The smallest amount that you can play with is just ten pennies, while the biggest is £20.00 which seems to follow suit with the latest trend to much smaller amounts for the maximum bet.

The slots experts at Stormcraft Studios have included the autospins function, as well as stop limits for a single win amount and for a total loss that may be optionally specified by the players.

How to Win Jungle Jim and The Lost Sphinx Slots

You can view all of the symbol pays by opening up the paytable, but let us do the number-crunching for you instead.

The most rewarding symbol is Jungle Jim whose symbol appearing five times on a payline pays 10x multiplied by the winning bet.

The Jungle Jim and The Lost Sphinx slot logo is the game's wild as it substitutes for all other symbols except the bonus.

The lead feature is actually the base game collapsing or tumbling reels. Call them what you will, it is the chain reaction of subsequent wins that ups the levels of the multiplier. The maximum multiplier comes with the fifth level of winning outcomes coming from a single spin. Each level slaps a multiplier on the concurrent wins, so a lucky round such as this can turn up some pretty good wins.

Jim is the game's wild symbol but it also triggers the free spins bonus feature. When three of these symbols stop on the reels the player gets 12 free spins on five reels, five rows and 50 paylines.

What is more, chain reactions are also part of the gameplay during the free spins, with a notable difference - the ultimate multiplier is 20x on the fifth consecutive win.

The free play version of this game may be available at those casinos that carry it on their roster of slots, and offer demo games at the same time. There are few such casinos on this page, however, there is no need to pursue this because the smallest bet is just ten pennies.With few pounds you can try Jungle Jim and The Lost Sphinx slots and get a feel for the reel action it can possibly deliver.

Will you take Jungle Jim on this reel adventure or pass on the game? We wouldn’t go the second without first taking it for a number of spins. The chain reaction is an amazing feature that can crank up the winnings to serious heights.

Claim a welcome offer to play Jungle Jim and The Lost Sphinx at some of the best casinos online.

Lord of the Wilds